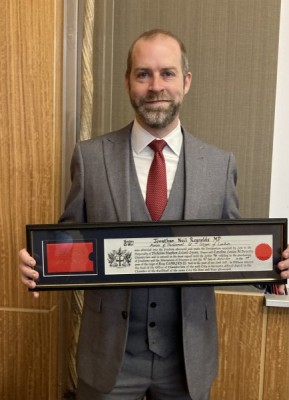 Shadow Minister Jonathan Reynolds has been awarded the Freedom of the City of London today.

He was first elected as the Labour and Co-Operative Member of Parliament for Stalybridge and Hyde, Greater Manchester, in 2010.

Mr Reynolds was appointed Shadow Minister for Energy and Climate Change in 2013, before moving to the Shadow Transport Team in 2015 and then Shadow City Minister in 2016.

He first entered the Shadow Cabinet as Labour Leader Keir Starmer’s Shadow Department for Work and Pensions spokesperson before taking on the Business brief in the most recent reshuffle.

Mr Reynolds launched Labour’s long-term industrial strategy in September, which seeks to work in partnership with business to tackle some of society’s biggest challenges.

“It is a honour to have been awarded the Freedom of the City. Having served as Labour’s Shadow City Minister and now as Shadow Business Secretary, I have seen first-hand the huge benefit financial services can bring.

“The contribution of the City of London can be felt across the whole country, including my own constituency in Greater Manchester. It is a vital part of our economy and our lives through the products and services we use every day. Labour will provide the certainty business needs to invest in Britain and keep the City of London a world leading destination for decades to come.”

“We are delighted to have awarded the Freedom of the City to Jonathan.

“His contribution to both the City, London, and UK business as a whole is hugely significant.

“This is important work, and it is fitting that this is recognised.”

One of the City of London’s ancient traditions, the Freedom is believed to have begun in 1237 and enabled recipients to carry out their trade.

As well as being nominated for, or applying for, the Freedom, it is also offered by the City of London Corporation to individuals as a way of paying tribute to their outstanding contribution to London or public life, or to celebrate a very significant achievement.

In August, it was announced that the entire England Women’s Football Team will be awarded the Freedom of the City of London, following its 2-1 win over Germany in the European Championship Final at Wembley.

The City of London Corporation is the governing body of the Square Mile dedicated to a vibrant and thriving City, supporting a diverse and sustainable London within a globally-successful UK www.cityoflondon.gov.uk