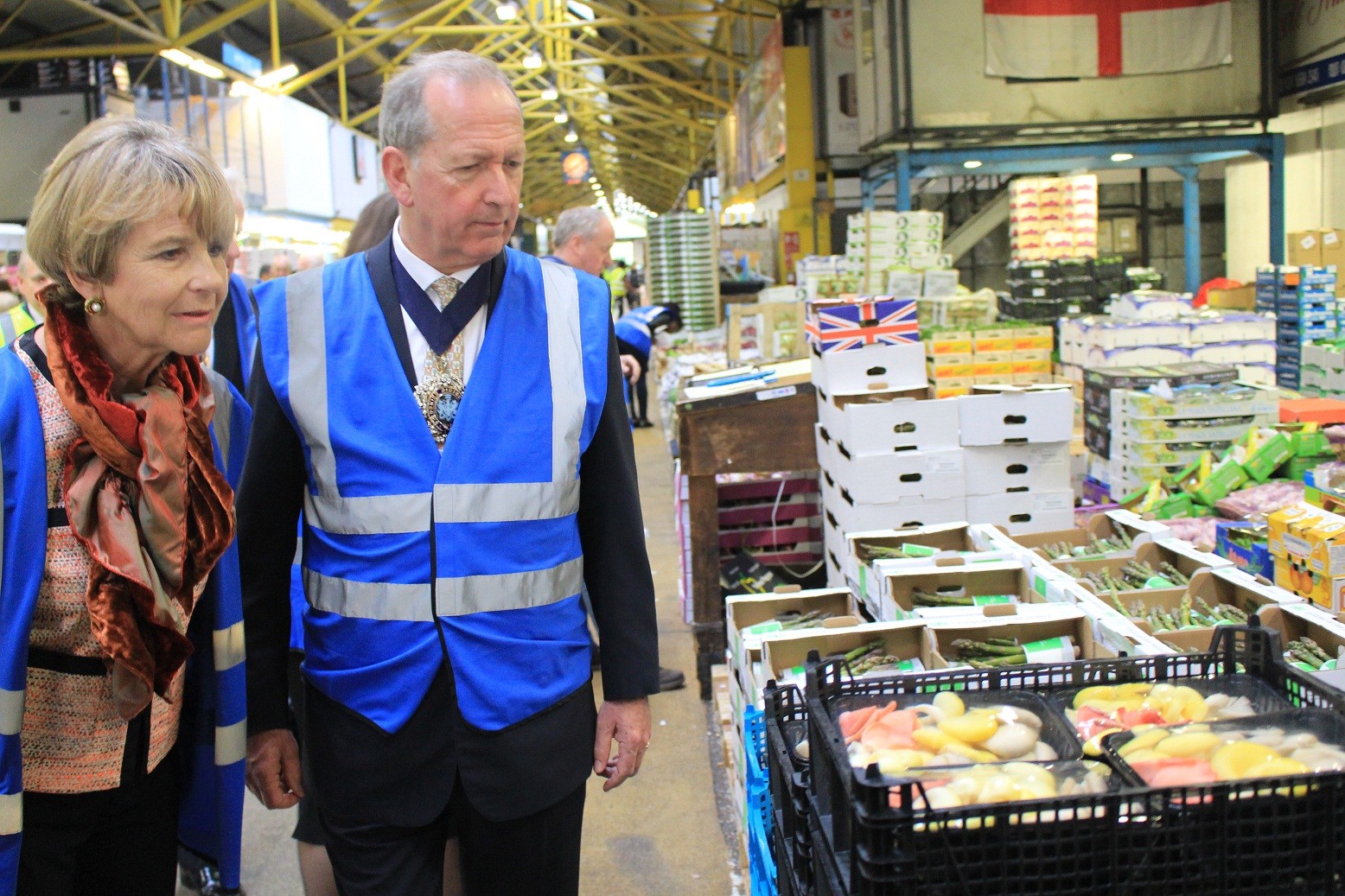 New Spitalfields Market, the UK's leading wholesale fruit, vegetable and flower market, welcomed Alan Yarrow, Lord Mayor of the City of London, this week (12 May), as he toured the market to meet traders and view their produce.

The market is owned and managed by the City of London Corporation along with Billingsgate and Smithfield markets in London, and is one of the must-visit destinations for every Lord Mayor during their one-year term in office. About 750,000 tonnes of fresh fruit, vegetables and flowers pass through New Spitalfields Market every year, and its customers include secondary wholesalers, retailers and smaller catering supply businesses.

“I enjoyed visiting New Spitalfields Market, because it is useful to hear the traders talk about the challenges and opportunities facing the market, which has been on its current site for 24 years. The City of London takes a pride in its three wholesale food markets and in my view, there is a particular strength in markets where the customers meet the traders, not least, because it helps the regulation process.”

During a breakfast meeting after the tour, the Lord Mayor received a £500 cheque from the Tenants' Association for The Lord Mayor’s Appeal 2015, which is supporting the leading disability charities, Mencap and Scope, as well as three UK arts’ organisations. Before leaving the market, the Lord Mayor and the Lady Mayoress were presented with a basket of fruit and flowers.

About the Lord Mayor of the City of London
The Lord Mayor is head of the Square Mile’s City of London authority for one year and the position is unpaid and apolitical. It is an exceptionally demanding role. The Lord Mayor spends some 90 days abroad and addresses some 10,000 people face-to-face each month (making around 800 speeches a year). The Lord Mayor represents City businesses and helps the City Corporation advise the Government of the day on what is needed to help the financial services sector to function well. The Lord Mayor frequently travels to represent the City; and travels overseas with the status of a Cabinet Minister. On average, the Lord Mayor will meet one head of state a month and will meet a prime minister or finance minister each week to discuss financial services, often in conjunction with senior City business representatives. The Lord Mayor, who is unpaid, lives in the Mansion House for the Mayoral year.

About the City of London Corporation
The City of London Corporation provides local government and policing services for the financial and commercial heart of Britain, the 'Square Mile'. In addition, the City Corporation has three roles: (1) We support London’s communities by working in partnership with neighbouring boroughs on economic regeneration, education and skills projects. In addition, the City of London Corporation’s charity City Bridge Trust makes grants of more than £15 million annually to charitable projects across London. (2) We also help look after key London heritage sites and green spaces including Tower Bridge, Museum of London, Barbican Arts Centre, City gardens, Hampstead Heath, Epping Forest, and Burnham Beeches. (3) And we also support and promote the ‘City’ as a world-leading financial and business hub, with outward and inward business delegations, high-profile civic events, and research. See www.cityoflondon.gov.uk for more details.