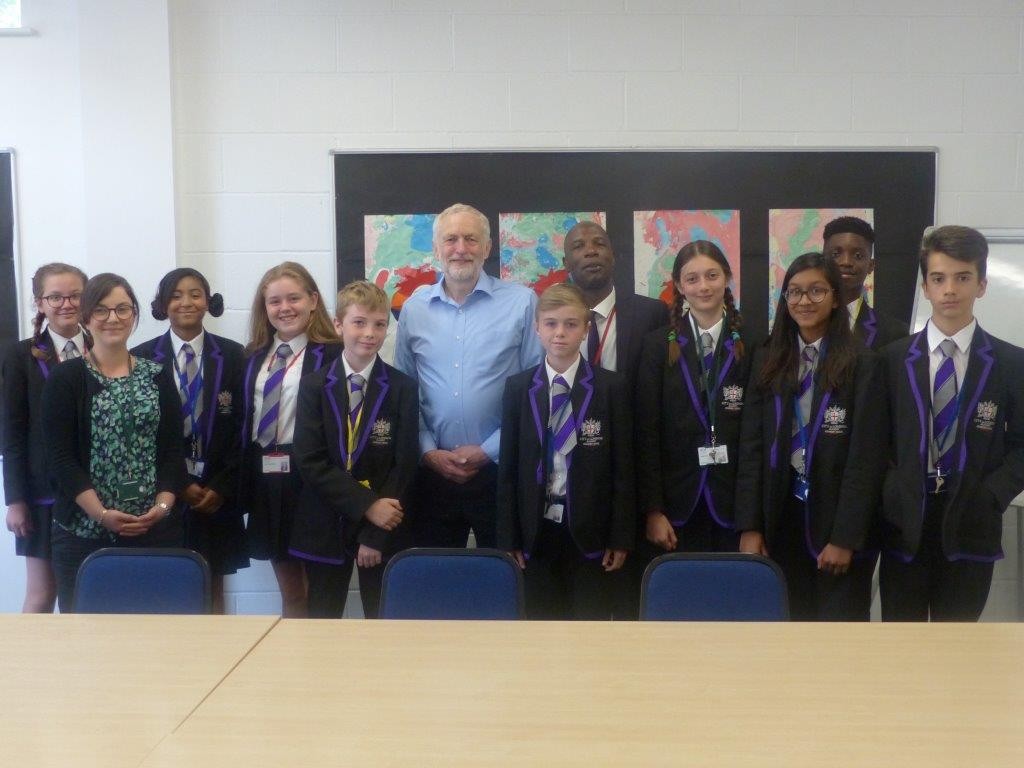 Pupils from the City of London Academy Highbury Grove were visited by Labour leader Jeremy Corbyn.

The MP for Islington North and long-time Islington resident met with Year 7 students for a question and answer session. The pupils posed thoughtful questions for Mr Corbyn, who spoke in detail about his hopes for the future of education; the aspects of local politics, his political motivation, the voting age and Brexit.

During his visit to the Islington school Mr Corbyn watched a Year 7 cricket lesson, attended a musical performance by Year 9 students and listened to the music of the school’s The Holloway Road Project.

The pupils have learnt about the history of the road and its significance to the community and wider London. Using this as inspiration they have worked alongside local songwriter Andrew Wilson to compose songs that focus on Holloway Road in times past and present.

Mr Corbyn was invited to listen to a variety of pieces produced by students involved in the project, from songs about the Peasants’ Revolt in 1381 to those about the shops of today.

Mr Corbyn’s visit also gave him the opportunity to learn about the turnaround of the City of London Academy Highbury Grove over the last year and about the promising future of the school. Highbury Grove School was recognised by Ofsted for its “swift” and “effective” improvements to teaching and pupil behaviour last year after it was taken over by the executive leadership of the City of London Academies Trust in September 2017.

“I was pleased to welcome Jeremy Corbyn and grateful to him for taking the time to visit our students as a constituency school.

“We had some very positive discussions about the progress of the school and our students. All the students and staff enjoyed the visit and we would be delighted to welcome Mr Corbyn again.”

“We aim to ensure that young Londoners have access to the information, advice and experiences that will help them to progress into fulfilling careers.

“Jeremy Corbyn’s visit was clearly beneficial for the students. I’m pleased that they could speak to him learn a bit about his career but, also for the Labour leader to learn about how far the school and the students have come, with the help of great leadership and staff.”

The City Corporation sponsors or co-sponsors 10 academies across Hackney, Newham, Islington and Southwark. In 2017, Sutton Trust named the City Corporation as the UK’s best academy sponsor for empowering pupils from disadvantaged backgrounds to perform above the national average, and the leading academy sponsor for Progress 8 and Attainment 8, which track pupil progress and achievement.

About the City of London Corporation:

The City of London Corporation is the governing body of the Square Mile dedicated to a vibrant and thriving City, supporting a diverse and sustainable London within a globally-successful UK.