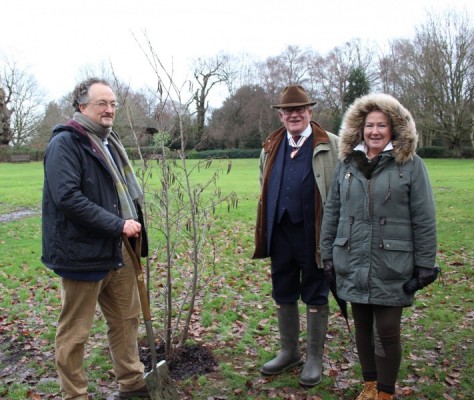 The first of 33 new trees have been planted on Hampstead Heath as a living memorial to Her Late Majesty Queen Elizabeth II.

11 Oaks, 11 Elms and 11 apple and pear trees are being planted on the beauty spot, as part of the Queen’s Green Canopy campaign, a tree planting initiative created to mark The Queen’s Platinum Jubilee in June.

Following her passing in September, His Majesty The King agreed to extend the scheme to allow people to plant trees in her memory.

On Saturday (14 January), an Alder tree that was part of the Tree of Trees – a living sculpture which sat in front of Buckingham Palace during the Platinum Jubilee Celebrations – was planted in Golders Hill Park, adjacent to the Heath.

It was gifted to Hampstead Heath, which is run as a charity by the City of London Corporation, as thanks for hosting celebration events for the Golden and Platinum Jubilees in Golders Hill Park.

“The trees on Hampstead Heath inspire so many people with their beauty and bring many environmental benefits – filtering air pollution, providing shade and increasing biodiversity by creating new wildlife habitats.

“We are honoured the Heath was chosen as part of this initiative, creating a living memorial to Her Late Majesty the Queen.”

“Her Late Majesty The Queen loved the outdoor natural environment and recognised the extraordinary value of open spaces to national health and wellbeing.

“A symbol of unity for the country and Commonwealth, she reigned with an unwavering commitment to public service.

“We are excited and proud to support this campaign which will benefit people right across the country.”

The City Corporation manages over 11,000 acres of open space in London and southeast England, including Epping Forest and Hampstead Heath, and over 200 smaller sites in the Square Mile, investing over £38m a year.

The City Corporation’s green spaces, most of which are charitable trusts, are run at little or no cost to the communities that they serve.

They remove around 16,000 tonnes of carbon from the atmosphere a year, equivalent to 44% of the City Corporation’s annual carbon footprint.

They are protected from being built on by special legislation.

2. Planting an avenue of Elms on the Health Extension

11 Oaks are being planted near the Tumulus, 11 Elms on the Heath Extension and 11 apple and pear trees in Kenwood Yard, which was the site of an old orchard.

ABOUT THE CITY OF LONDON CORPORATION

The City of London Corporation is the governing body of the Square Mile dedicated to a vibrant and thriving City, supporting a diverse and sustainable London within a globally-successful UK –  www.cityoflondon.gov.uk