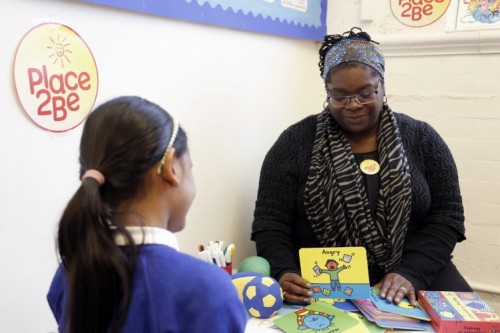 The City of London Corporation’s charitable funder, City Bridge Trust, has awarded a grant of £159,650 to Place2Be - a children’s mental health charity that provides emotional and therapeutic support, to develop its school-based services in Ealing and Brent.

Established in 1994, Place2Be has pioneered a whole school approach to supporting mental health, including a range of services to support children, teachers and parents or carers. Through school-based counselling they aim to improve a child's ability to reach their academic potential and form healthy relationships. The charity aims to address mental health issues in children before they escalate into more serious problems.

Place2Be currently works with 282 schools nationwide with the support of 1,000 volunteers.

One in ten children aged between five and 16 years has a mental health problem. The impact of disadvantage on children's emotional wellbeing is significant and many young people in areas where Place2Be is active are particularly at risk of poor mental health as a result.

The grant will go towards funding a Service Manager for Brent and Ealing who will oversee their services across 32 schools in the two boroughs. Each school will have a dedicated Place2Be room full of play and art materials which are used in the counselling sessions.

“Place2Be is already helping hundreds of schools across the country and I’m delighted we can help them develop these services further in Brent and Ealing. The charity has grown significantly over the last few years and I hope this will continue and they can help even more children and their families in the future. They are providing vital support to children through services which become an integral part of the school community. City Bridge Trust is committed to tackling disadvantage across the capital and making London a fairer and better place to live.”

“We are immensely grateful to City Bridge Trust for funding our West London Service Manager. This generous support will enable us to deliver vital mental health services to children in over 30 schools across Brent and Ealing. Many of the children supported by Place2Be face complex challenges which affect their behaviour and ability to learn.

“By supporting children’s emotional wellbeing early on, we are helping them to grow up with prospects rather than problems. Together through this fantastic partnership we will build happy, resilient and mentally healthy schools.”

11-year-old Ben was deemed to be ‘unteachable’. His attention-seeking behaviour frequently resulted in him being sent out of lessons to aimlessly wander the corridors. He was unpopular with his peers and often got involved in violent arguments. After an incident of arson resulting in a five day exclusion, Ben was referred to Place2Be for a year of counselling. When Ben first met his Counsellor he presented as a funny, charming young boy to whom family seemed exceptionally important. Yet, she soon learned of his unstable upbringing, being shifted between family members’ homes across the UK as they felt they couldn’t cope with his behaviour.

The loss of his grandfather led to his behaviour becoming even more disruptive, and he was asked to leave his school. Ben’s father felt very guilty for his unsettled start in life but despaired at his inability to form a positive relationship with him, making his parenting style authoritarian and punitive. It took many weeks to build a trusting relationship with Ben and he frequently tested his Counsellor’s loyalty with his extremely provocative behaviour. However, as their relationship developed, Ben gradually began to show his anxiety, expressing the difficulties of his life at home through drama and play.

As the Counsellor gained a deeper understanding of the root of Ben’s behaviours, she was able to share this with his teachers and develop strategies to ensure both his and their needs were being met. This allowed Ben to focus in lessons, showing significant improvement in his academic achievement. He gained confidence at school, making friends, joining a mentoring scheme and even quitting smoking, thanks to his new-found self-belief. His Counsellor said that “working therapeutically with Ben was a slow, painstaking process but also extremely rewarding” and she was “so proud” of the dramatic change in his self-esteem