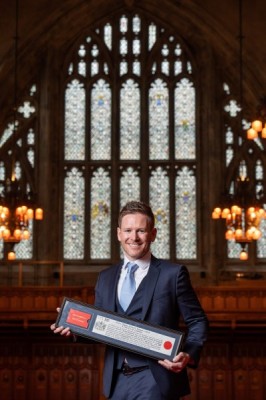 England’s one-day cricket captain Eoin Morgan, who led the team when they won the World Cup for the first time in one of sport’s greatest matches, became a Freeman of the City of London at a ceremony today.

He led England’s cricketers to victory in a titanic tussle against New Zealand at Lord’s Cricket Ground in 2019, when the match was tied twice.

Both sides scored 241 in their 50 overs and were level on 15 after batting for an extra over in an extraordinary and electric atmosphere.

England became world champions because of the fours and sixes they scored - 26 to New Zealand's 17.

Dublin-born Eoin, 35, who plays domestically for Middlesex, is the all-time leading run scorer and most-capped player for England in one day internationals (ODIs) and twenty over (T20) international matches.

The left-handed batsman holds the England record for the fastest fifty in ODIs and during the 2019 World Cup he scored the highest number of sixes in an ODI innings - 17.

Eoin follows in the footsteps of other England captains who were granted the Freedom of the City, including Andrew Strauss and Alastair Cook, who captained England to Ashes series victories against Australia.

A spokesperson for the City of London Corporation said:

“We are delighted to have awarded the Freedom of the City to Eoin.

“His contribution to cricket has been extraordinary and unique and it is fitting that it is recognised in this way.

“Sport plays a vital role in bringing together communities and enhancing physical and mental health. It is key to the capital coming together again as it recovers from Covid, bringing back optimism and energy.”

“I am thrilled and immensely proud to receive this recognition.

“Leading England to its first ever one day World Cup win was my dream but cricket isn’t just about showcase events like this. It’s about nurturing and realising many dreams. This involves encouraging and empowering communities to participate. Cricket is a wonderful sport for everyone to enjoy.”

The Freedom of the City of London, which is believed to have begun in 1237, was used to enable recipients to carry out their trade. Today, people are nominated for, or apply for, the Freedom, because it offers them a link with the historic City of London and one of its ancient traditions.

The Freedom is also offered to individuals by the City of London Corporation to help celebrate a significant achievement, or to pay tribute to their outstanding contribution to London life or public life.