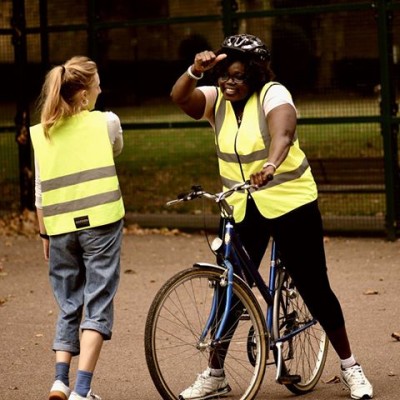 The City of London Corporation’s charitable funder, City Bridge Trust, and UBS have just awarded a £40,000 grant to a unique London bike project which aims to get refugees cycling to help them become better integrated in their community.

The Bike Project, based in south London, was set up four years ago by 29- year- old Jem Stein who will use the funding to employ more bike mechanics to support the project.

The charity collects and refurbishes second hand bikes and donates them to refugees and asylum-seekers in London. 13,500 asylum seekers flee to London every year, and over the same time period 27,500 bikes are abandoned. By donating these bikes to refugees, The Bike Project provides them with an affordable, healthy and sustainable means to access vital resources and become part of their communities.

Working with refugees as a student at LSE and later as a youth worker, Jem was inspired to set up the project after feeling prohibitive public transport costs prevented refugees from accessing essential resources and services.

The grant is part of City Bridge Trust’s Stepping Stones Fund which launched over two years ago to support charities and social enterprises in London who wished to access the social investment market. The latest round of grants has seen a total of £700,000 awarded to 17 diverse organisations. This brings the total awards given to £2,185,100 to 49 organisations since the launch of the Stepping Stones Fund in 2015.

“I felt London was awash with abandoned and disused bikes. My vision was to match the two: refurbish bikes for refugees in London. Since the launch in March 2013, we have provided over 1,800 bikes to refugees in London. A bike allows a refugee to access essential services including education, healthcare, basic amenities and psychological support.”

Every Thursday, refugees and volunteers work on second hand bikes at the workshop. They also run a project to teach refugee women to cycle from scratch and work closely with children's charities to provide bikes and cycling training for children.

“'The Stepping Stones grant is huge boost to our long term goal of being financially sustainable and independent. It is very hard to find funders who are willing to support this type of work so we are extremely grateful that UBS and City Bridge Trust are so forward thinking. Most importantly, it is a huge boost to the many thousands of refugees who will ultimately benefit from their foresight.”

“City Bridge Trust is committed to supporting Londoners to make the city a fairer place to work and live. This project is helping thousand s of refugees every year and allowing them better access to the basic amenities which are essential to live. The funding will help them expand the project and continue to enhance the lives of many. We are thrilled that we are already helping so many projects through the fund.”

The success of Stepping Stones Fund is underpinned by a strong partnership between City Bridge Trust and UBS. It is an exciting and very effective combination of the Trust’s grant making expertise, the generous funding offered by UBS and the skills and insights of the bank’s corporate volunteers. The role that the non-profit and private sectors play in working towards the public good is ever more important in the age of a shrinking state.

"The demand on the Fund measured by applications received highlights the continued need within the charity and voluntary sector for its existence. UBS is pleased to be supporting grantees not just through the provision of much-needed capital but also the skills and expertise of UBS volunteers which has proven to be a valuable experience for all involved. We look forward to continuing to develop this nascent market and to help bridge the funding gap for charities preparing for social investment."

In total the City Bridge Trust provides grants of around £20 million a year towards charitable activity benefitting Greater London. To date, over £2 million has been awarded on the Stepping Stones Fund with 49 organisations benefitting.

The Trust is London’s biggest independent grant giver tackling disadvantage across the capital.