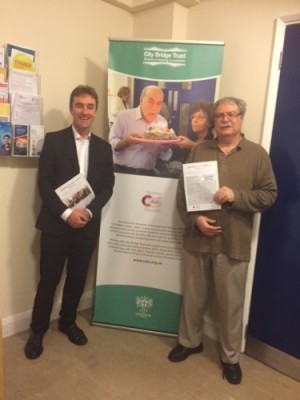 The Centre for Armenian Information and Advice has transformed thousands of lives thanks to over £320,000 of funding it has received from the City of London Corporation’s charitable funder, City Bridge Trust, since 1995.

City Bridge Trust Director David Farnsworth recently visited the Centre for Armenian Information and Advice (CAIA), based in Acton, Ealing, to see how the Trust’s funding was being used to reduce disadvantage. He was inspired to see the amazing work the charity was doing to support the lives of Armenians across London and the community as a whole.

The CAIA works to enhance the quality of life of over 20,000 Armenians living in London through the provision of welfare, educational and cultural services.

A majority of the City Bridge Trust funding has gone towards enhancing the centre’s work with older people as well as its advice services to Armenians of all ages.

In 2015 the charity received an unconditional grant of £20,000 from the City Bridge Trust, awarded as part of its 20th anniversary celebrations. The organisation chose to spend this on repairing the community centre’s roof and internal structure, as well as updating its IT system and photocopiers and boosting its operating costs.

Misak Ohanian, CEO of the Centre for Armenian Information and Advice, said:

“My colleagues and I were very pleased to welcome David to witness some of the work we carry out day in, day out, for vulnerable and disadvantaged people such as the elderly, carers and refugees. Thanks to the City Bridge Trust funding the centre has changed many lives.

“The Trust has supported CAIA seven times over the past 20 years- most recently with our advisory services which many people rely on to access their rights, public services and help overcome various inequalities and barriers they experience. Thanks to CBT's grant, 600 plus people have been helped annually.”

“I was delighted to see the inspiring work the charity was doing with our funding during my recent visit. They are enhancing the lives of so many Armenians every month due to the wide range of support services they offer and providing vital facilities for the wider community. City Bridge Trust is committed to supporting Londoners of all backgrounds to make the city a fairer place to work and live.”